Against The Current Tour: Manchester 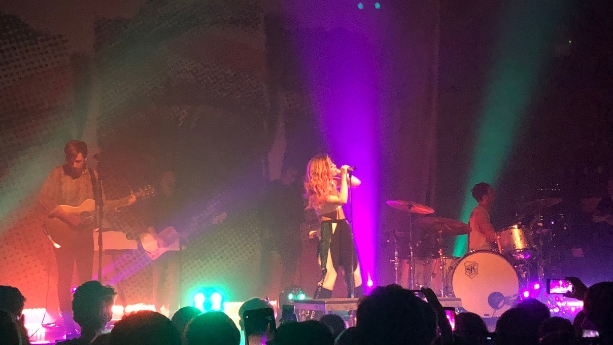 American alternative rock/pop trio Against The Current toured the UK with a series of headliner shows, supported by The Faim. Sunday 23rd September 2018 marked their Manchester date, taking to the stage at the O2 Ritz. Blending a high energy performance with astonishing vocals,  each song is delivered with powerful audacity. It should be illegal to miss the opportunity to attend one of their shows...

Opening for Against The Current were pop punk/alternative band The Faim. Formerly known as Small Town Heroes, they switched up the band and have quickly built a successful platform and loyal fan base. The boys utilised their 30 minute set to perform some of their most popular hits including Make Believe and Saints of the Sinners. Expelling great energy and engaging with the crowd, they definitely got the audience pumped up in time for the headliner. Personally, I found the vocals and several of their tracks similar to the likes of Panic! At The Disco and Fall Out Boy, which I would consider a compliment to any aspiring musician. Their final song was Summer Is a Curse, leaving fans satisfied.

Encore In Our Bones and Wasteland were performed during the encore, featuring Chrissy's signature near-impossible back bend on stage. An Against The Current show is the perfect live performance to attend for a positive atmosphere with incomparable power and the opportunity to sing along to your hearts content with thousands of other fans.

Make sure to check out Against The Current over on Spotify.
Attended the show? Let me know in the comments below or over on Twitter!

Posted by Shann Greenway at 10:54:00
Email ThisBlogThis!Share to TwitterShare to FacebookShare to Pinterest
Labels: against the current, music