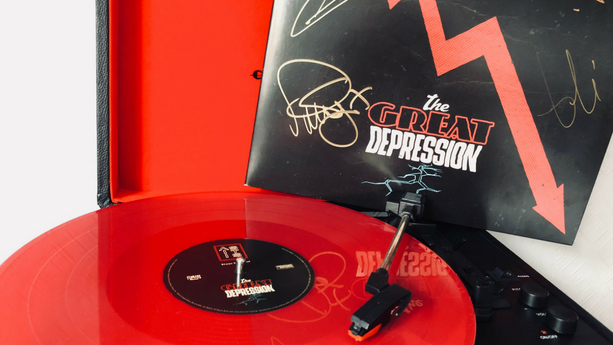 During their acoustic set the lads performed 3 songs from the album; The Fire, The Dark, The Stigma (Boys Don't Cry), and The Wounded World. As always, vocalist Patty Walters was bursting with energy and put all of his energy into the performance as if it were a full headlining show, despite the fact it was a small gathering of 200 fans. Amidst the songs the band decided to start an impromptu Q&A session which was received well, with questions across the spectrum ranging from music to completely random topics.

Q: The album contains a lot more electric drums than previously. How will you tackle that on stage with live performances?

A: It'll be quite easy really, just a simple sound-pad will work fine to be able to perform them so no need to worry! We're prepared for the tour.

Q: Which albums and artists inspired the creation of the new album?

A: As It Is, haha! Actually there's an album which I really love by a band called Armor For Sleep. They released an album called What To Do When You Are Dead which is really cool and interesting. It's something I listened to a lot growing up and it had quite a big influence on The Great Depression. If you get chance you should definitely check them out, it's great and well worth listening to.

Q: Does pineapple belong on pizza?

A: Hell yeah of course it does! You can have whatever the fuck you want on your pizza, you want pineapple? Have pineapple and don't let anybody else tell you otherwise.

After the acoustic performance, each person got the opportunity to chat to the band for a minute or two whilst getting their album signed. Due to the tight schedule, pictures were only allowed to be taken during the acoustic set however the boys were all super friendly and made it worth the wait.

If you haven't checked out the album yet, make sure to purchase it here or head over to Spotify and give it a listen.
Still unsure? You can read my album review by clicking here.
Posted by Shann Greenway at 12:17:00
Email ThisBlogThis!Share to TwitterShare to FacebookShare to Pinterest
Labels: acoustic set, album signing, as it is, Featured, music