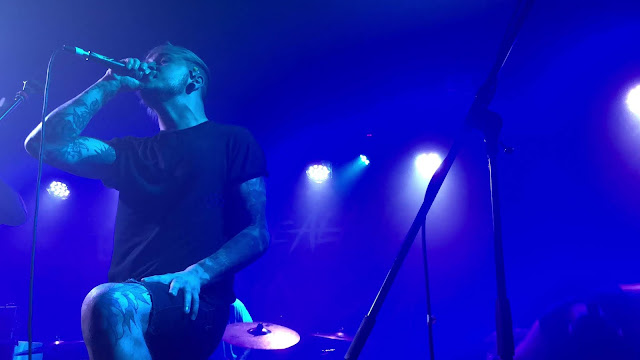 First on stage to warm up the crowd were InVisions, a cataclysmically heavy band with an immense energy. With a similar sound to the likes of Landmvrks, they're easily recognisable by intense screams and fast-paced guitars. Discouragingly, the crowd seemed quite taken aback by the brash, unapologetic entrance, despite several attempts from vocalist, Ben, to engage the audience. However, as they were performing first in the small venue, the majority of fans had not yet arrived. Eventually spirits began picking up towards the end of their 30 minute set in time for Sworn Amongst.

Sworn Amongst were second on stage to perform at 8:00pm with a sound which is comparable to Parkway Drive. During their half an hour set, the crowd picked up with several energetic pits throughout, especially in The Cleansing, Severance and the last few songs. Vocalist Darryl Jones boasted a great natural stage presence, consistently communicating with fans to get the audience riled up ready for what was to come.

Next up to perform were Shields, who instantly managed to dramatically change the atmosphere in the room from the very first chord. Making an appearance on this tour as a farewell due to the band coming to an end, the lads put all of their energy into each and every song. Front man and vocalist Joe Edwards truly displayed his full talent with intense screams and passionate lyrics during hit It's Killing Me. Sharing the microphone with fans from the barrier and the pit several times in their set, accompanied by an impressive stage dive, their performance was not one to forget and 100% set the tone for the remainder of the gig. Ending with a heartfelt speech thanking fans for coming to watch them for the final time in Manchester, emotions were high throughout the crowd.

Unfortunately, due to a technical issue with the sound board, Kingdom of Giants failed sound check and missed their set time. Unable to perform, you could sense the panic from both the bands and staff alike as they rushed to amend the issues in time for Oceans Ate Alaska. Set to perform at 10:15pm, the venue staff and musicians did an amazing job, working to get things running smoothly in time for the headlining band to start, only slightly delayed from schedule by 10 minutes.

Despite the technical issues, Oceans Ate Alaska absolutely killed it in their shortened 35 minute set. Opening with Benzaiten, the first song from their most recent album release, the technical metalcore sound caused havoc in the crowd with fresh, forceful pits. This was followed by the likes of Covert, Floorboards and Hansha, bringing the venue to life with a compelling, harmonized blend of traditional Japanese instruments and their signature modern metal sound. Taking a break from their own tracks, their popular pop goes punk cover of Drunk In Love had fans ecstatic. Unluckily, issues with the sound began to creep back in with the microphone repeatedly failing part way through the song, but with the support from the crowd, the performance continued. Undeterred by the technical challenges, their encore of Clocks was well-received and left everyone begging for more with a "10 more songs" chant. Sadly we didn't get that...

Want to catch a show from the tour? Unfortunately, all of their UK tour dates have now passed, however you can still see them in Europe at one of the remaining shows!

You can also catch my interview with Shields from before the show by clicking here.
Posted by Shann Greenway at 12:06:00
Email ThisBlogThis!Share to TwitterShare to FacebookShare to Pinterest
Labels: concert, Featured, music, oceans ate alaska, shields