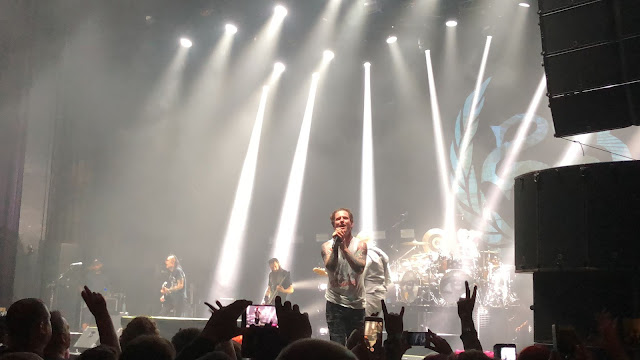 American rock/metal band Stone Sour are currently performing across Europe and the US, touring for their most recent album 'Hydrograd' with supporting bands Blood Youth and Nothing More. Offering a mere 3 UK tour dates for 2018 in London, Manchester and Nottingham, it was to no surprise that the shows sold out months before tour even began. With lead singer and front-man Corey Taylor, also a member of the ever-popular heavy metal band Slipknot, it was clear that this would be a show not to miss from the get-go.

Kicking things off in the UK at the O2 Apollo in Manchester, opening act Nothing More took to the stage with a topless Jonny Hawkins for their 40-minute supporting set. Boasting an alternative-rock sound with a slight electronic vibe, noticeable similarities to Sleeping With Sirens were present throughout. Unfortunately despite their best efforts to amp up the crowd with deafening vocals and interesting stage contraptions, the room remained unexpectedly still with the majority of fans pre-occupied in conversation causing their 50-minute set to be cut 10 minutes short.

Despite the slightly disappointing support act, luckily Stone Sour pulled it out of the bag and made every second count with their 90 minute set jam-packed with hits from their best albums to date. Opening with smash-hit 'Whiplash Pants' from their new Hydrograd album, the somewhat spiritless crowd instantly transformed into the expected rowdy, passionate and fiery audience every single person wanted to be a part of. From start to finish, each lyric's potent influence inspired the audience to create an irreplaceable memory.

After riling up the crowd with Say You'll Haunt Me, Knievel Has Landed and 30/30-150, Corey took us back to the start by performing 'Bother' solo from Stone Sour's first album. Dramatically altering the atmosphere in a matter of seconds, each and every person in the crowd took the time to appreciate his phenomenal vocals and ability to capture the attention of an entire audience from one simple chord. Post-performance, satisfied fans used this opportunity to air their idolisation for the artist before preparing to experience more powerful vocals and hard-hitting beats from the entirety of the band.

Performing the killer song Made Of Scars, fresh album-hit Song #3 and the immensely emotional yet strong, striking Through Glass with an unmistakable energy only given by a select few extremely-talented rock artists, these songs led into their absolutely astounding encore. RU486 and Fabuless were accompanied on stage by several whacky waving inflatable tube guys, leaving the crowd screaming for more from their short yet sweet set in the boiling venue making an incredibly hot show, in both senses of the word.

If you're interested in seeing Stone Sour live during their 2018 Hydrograd tour, you can purchase tickets for the remainder of the tour here.