Beauty Bay Tried To Kill Me! 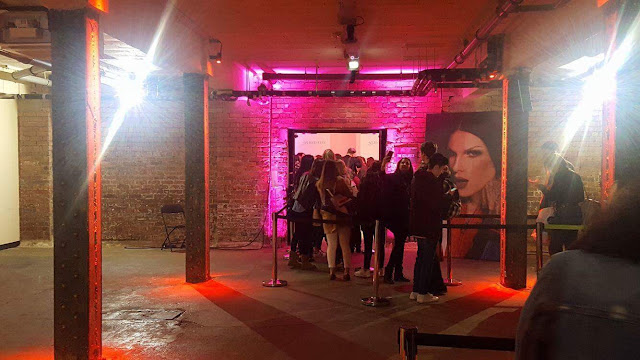 Beauty Bay, Jeffree Star, Manny MUA. If you're a makeup fan, you'll probably have heard these names. In fact, chances are that you'll have recently heard about the meet and greet events being organised across the UK to celebrate the launch of their collaboration collection. Myself and my friend Lyndsay decided to attend the Manchester one today, but oh fuck was that a bad idea...

Originally, to attend the event, all you had to do was click 'attending' on the Facebook event. However, due to the high demand, they decided to release free tickets. These tickets were designed to make sure that everyone would get to shop the collection, meet their idols and have an amazing experience at the event. Clearly, Beauty Bay are incapable of proper event planning and seriously pissed off a LOT of people. Lemme explain.


First of all, there were people travelling from all over the UK to Manchester to meet these two celebs. Everyone who got tickets was sent a page on the Beauty Bay website, which has since been deleted. On that page, it stated that if you were in the queue, you were 'definitely going to meet Jeffree Star and Manny MUA'. Voila: 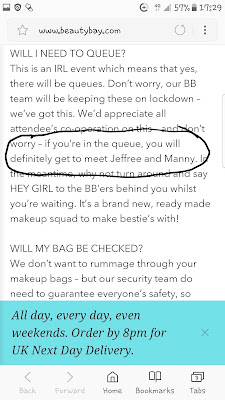 ​All well and good, right? Wrong. We arrived in the queue at 13:15 as the gates were due to open at 13:30. We then stood in the queue outside in the freezing cold in a queue which barely moved. At 15:45, we had our bags checked, ran down the stairs and walked into a room, expecting to find what we came for. Guess what we got instead? Another queue. We stood in that queue until 17:15, at which point the security guards slammed the doors in everyone's faces and told us all to leave. WHAT?

Turns out that Beauty Bay didn't book the venue for long enough and obviously sold way too many tickets for the event. There was still at least half of the fans who got tickets stood in this room and outside the venue queuing and not to mention, it was freezing cold and raining. It wasn't just me annoyed by this, look at all these gorgeous gals who were also let down. One of them even has Cystic Fibrosis, a terminal lung disease which can be seriously triggered by standing outside in the cold and rain. 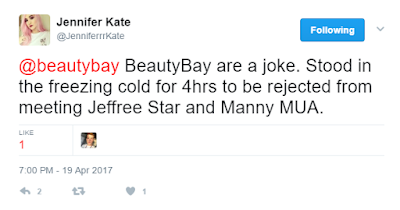 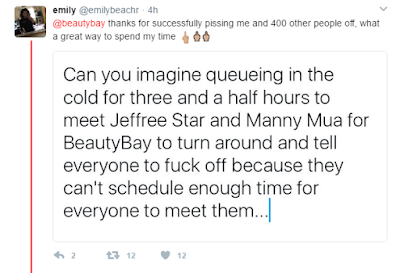 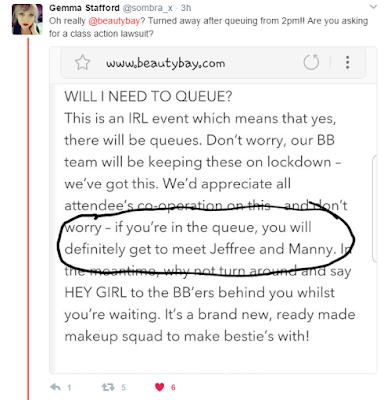 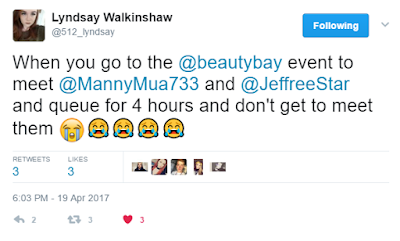 After this major drama, their way to resolve this was to tell you to write down your email and they would send you a discount code. I'm sorry but A. Your discount codes don't even work on Jeffree Star Cosmetics. B. That doesn't pay for the money people have spent on hotels, parking, travel etc. and C. Why the heck would anyone want to spend money on a site who let them down like this? LMAO Beauty Bay you cray hun.

There wasn't a single seat in sight and after standing for hours, there were no drinks or food available to buy once you got inside. Myself and several others felt incredibly dizzy and ill as we had been waiting for so long. All you could have bought was an overpriced sandwich or drink outside in the queue, yet that was no good once you were already in.

On top of this, I have weak ankles and a bad back and Lyndsay has arthritic knees. After standing for so long, we both could barely stand up, her knees gave way in the middle of the road and my ankles kept giving way too. Luckily, her fiance was able to take us home in the car as it's safe to say we wouldn't have made it home. What kind of brand who cares about their fans leaves them like this with no explanation of what was going on at the time?

Well done Beauty Bay, you well and truly fucked up this one. You disappointed a hell of a lot of people (seriously, check your social media for once, you're not going to like it). I'm surprised nobody ended up in hospital or worse. Don't try to plan an event again, it's definitely not your forte.

They have posted a tweet saying that they are going to email everyone to make it up to them, but until I find out what that is, I'm still hella pissed.

P.S, if you made it this far, please read my update here!

Were you disappointed by the Beauty Bay event in Manchester?

Let me know over on Twitter!
Posted by Shann Greenway at 20:53:00
Email ThisBlogThis!Share to TwitterShare to FacebookShare to Pinterest
Labels: beauty, beauty bay, event, lifestyle