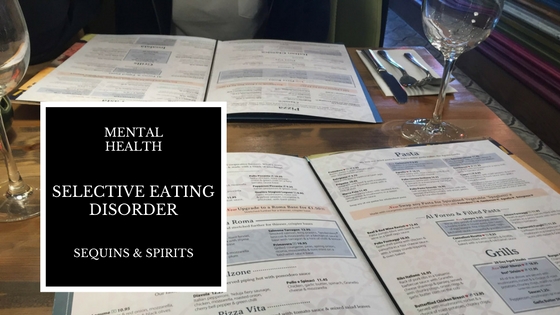 Today's post is a little bit different to usual, but it's something which I have to deal with on a daily basis and there definitely needs to be more awareness. Out of the wide spectrum of mental health issues, Selective Eating Disorder is incredibly obscure and is often viewed as just picky eating, but it's far from that. I've briefly mentioned it once before, but this time I'm providing a lot more information and detail...

So, What Is Selective Eating Disorder?

Also known as SED, Selective Eating Disorder is a phobia where the mere thought of eating specific foods causes feelings of anxiety as well as fearful reactions. Fussy eating is typically a learnt behaviour in children which is acted out for attention. However, SED is often developed after a person has a negative experience with food. The body relates that past experience with pain, disabling it from being able to venture past it's "safe" foods. I've put together an infographic comparing picky eating and SED to help distinguish a difference between them;

People who suffer with Selective Eating Disorder often feel an uncontrollable amount of dread with certain foods because of the smell, texture or taste, due to the fear of gagging or retching. Attempting to eat these foods result in failure as they cannot bring themselves to try it, no matter how badly they'd like to.

My Experience With Selective Eating Disorder

When it comes to diet, I'm not a healthy person, but I will happily try a lot of food from tomato-based and gravy-based foods along with all meats, most fish, all fruit and vegetables etc. The only thing I cannot bring myself to eat is dairy due to a negative experience with cream in the past.

When I was a child, my family would always purchase a cake from Morrison's which was covered with a thick layer of cream, followed by green icing. I used to always eat the icing, but for some reason I just never had any of the cream. One day, I asked my mum if I could try some and she gave it to me. However, the second I placed the cream in my mouth, I began retching uncontrollably and I can vividly remember leaning over my Nan's living room bin with tears streaming down my face. The texture knocked me sick and I still don't understand why to this day, but it affects me nonetheless.

Anyway, after this experience, anything with a slimy or creamy texture was completely cut out of my diet. Fast forward around 15 years to the present day and I still cannot eat cream, custard, eggs, soft cheeses, milk, salad cream, mayonnaise etc. Sometimes, on a particularly bad day, just the sight of pasta in a creamy looking sauce can make me gag. Due to this, whenever I go out to eat, I have to study the menu to check that there is something on the menu which is one of my "safe" foods. This also has to have no 'unsafe' sauces or sides. If you heard me ordering food, you'd often hear me saying 'I'll have this without ... and ... please'.

In day-to-day life, every single meal purchased has to be checked and double checked in my head before I can consider it safe for me to eat. People often don't understand the realness or seriousness of SED either, resulting in me and many others being called a 'picky eater' on a daily basis. It does get me down and I'd love to be able to try tonnes of new foods. Something as simple as being able to go out for a meal with my team at work would be amazing! It's always affected by me worrying when I can't find something safe for me to eat on the menu. Selective Eating Disorder needs to be recognised, it may not be as dangerous as other mental health conditions, but it affects so many people. Next time somebody tells you they cannot eat something, don't just attack their eating habits, instead, try to understand that there may be more going on than just being picky.

Do you know somebody who suffers with Selective Eating Disorder? Do you experience SED yourself?

I'd love to hear about your experiences, please share them with me in the comments section below!