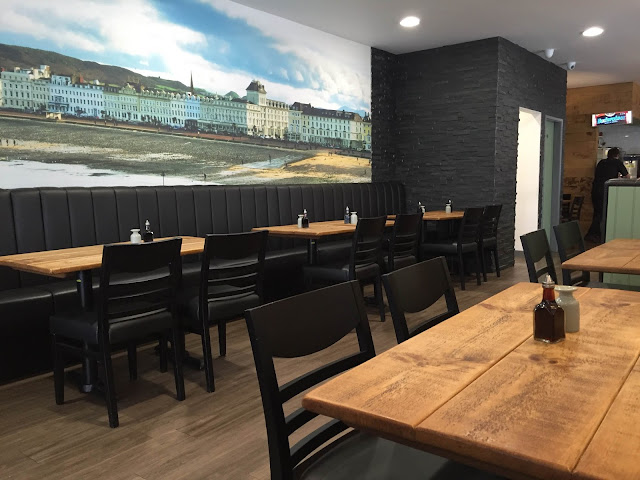 A few weekends ago, I took a trip down to Llandudno for a Welsh weekend away. I stayed in The Wilton Hotel which you can read all about but this blog post is all about on the Friday when arriving, myself and Matt went for a meal at a small restaurant called The Tribells. It used to be just a fish and chip shop and has established itself over the years. In case you're wondering, that is a giant photograph in the back... we weren't sure when we arrived and we were very convinced that it could be a painting! 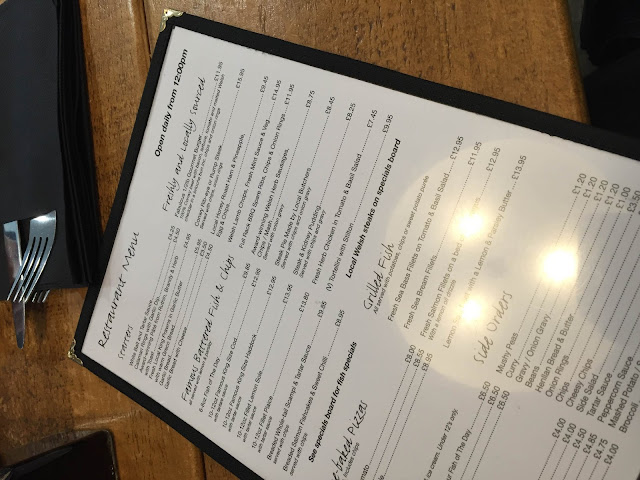 Upon entering The Tribells, we were taken to a table and given menus. Our extremely polite and attentive waitress then took our drinks orders and left us to decide what we would like to eat. We arrived quite early at around 4:30pm so it wasn't too busy but it still had tables reserved which is always a good sign. After trying to decide for quite a while which meal to choose as we were so spoilt for choice, we were starving by the time we decided! As soon as we placed the menus down and looked ready to order, our waitress appeared which was brilliant service. 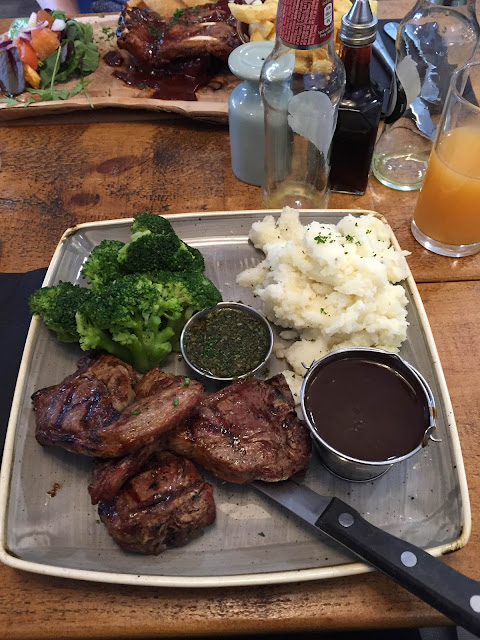 I decided to go for the mint lamb chops with homemade mint sauce, mashed potatoes and broccoli (obviously!) I loved how they put the mint sauce and gravy into separate little metal buckets on the plate as it looked super cool and it's great for those who may only want a little bit of sauce or dislike gravy. The only issue is that I burnt my fingers a little bit whilst pouring the gravy as the bucket was extremely hot; other than that there were no issues whatsoever. My meal was absolutely divine and my mouth still waters thinking about it now. The mash was so creamy and I didn't find a single lump in it, the broccoli was cooked to perfection (nobody likes soggy vegetables) and the meat literally fell apart on the plate, it was so tender!

Matt ordered the rack of barbecue ribs which you can see at the back of the picture of my food. I was going to photograph his but he already started eating it before I got chance to! However, the presentation of it was amazing and when I asked him his opinion, he stated "It was nice. Very nice." He was just gobsmacked at how good the food was! I can totally understand why too.

Overall, our visit to The Tribells was worth every penny and we were extremely impressed with both the standard of food and the service received from the waitress. I would definitely recommend to give this place a visit if you're ever in Llandudno and you won't regret it.


Have you ever visited The Tribells?

Let me know in the comments section below!

Posted by Shann Greenway at 07:00:00
Email ThisBlogThis!Share to TwitterShare to FacebookShare to Pinterest
Labels: food, llandudno, review, the tribells